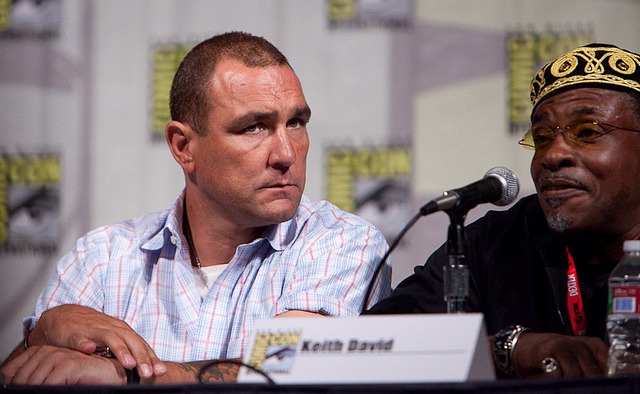 While most celebrities try to avoid being spotted in public, some of them are not afraid to show off a little.

From their favourite hobbies to their initials, many celebrities have personalised number plates that make their vehicles stand out from the crowd and attract extra attention on the streets.

From billionaire entrepreneurs to Hollywood film stars, television show hosts and Olympians, read on to discover five celebrities who’ve made their cars stand out with personalised number plates.

Former professional footballer and well-known actor Vinnie Jones is best known for his hard man roles in Hollywood movies. Although he doesn’t seem like the type that likes court attention, Jones has a cool personalised number plate that blends in.

Do you think you could work out it’s him from seeing 100 VJ on the streets? Instead of immediately identifying the driver, this personalised plate adds some personality to Vinnie’s vehicle without showing off too much.

Cypriot-born Dragons’ Den star Theo Paphitis built an empire valued at hundreds of millions of pounds in retail. His personalised number plate is dedicated to one of his most successful companies: the stationary retailer Ryman.

RY M4N is a great plate – it’s immediately easy to understand, iconic and something that perfectly suits Theo’s personality. It’s also easy to spot – Mr Paphitis has it fixed to his chrome plated Maybach.

Two-time former world champion boxer and Olympic medallist, Amir Khan has lots to be proud of. The well-known athlete has several personalised number plates, the majority of which are themed around his sporting skills.

Best known for The Apprentice, Alan Sugar is one of Britain’s richest entrepreneurs, with a net worth estimated at more than £1.04 billion. Like other entrepreneurs, he has a custom number plate that’s unique and grabs attention.

AMS 1, which uses the initials of Mr Sugar’s full name – Alan Michael Sugar – stands out from the crowd and makes a great impression. The plate is currently fitted onto Mr Sugar’s Rolls Royce Phantom.

Like many other celebrities, TV show host and radio broadcaster Chris Tarrant has a personalised number plate that isn’t about him personally, but dedicated to a hobby that he’s passionate about.

Tarrant is a keen angler and loves to spend his free time fishing. His custom number plate – CHU 8B – is a humorous nod to one of Britain’s most popular freshwater fish, the European chub.